King Jesus is holy and righteous and pure and loving and kind, but He has enemies. His enemies are your enemies. Some are invisible spirits, but some are hidden in plain sight. Can you see them? Together, they are called a Beast:

I saw a Beast of prey coming up out of the sea, having seven heads and ten horns, and upon its horns ten crowns and upon its heads blasphemous names. The beast that I saw was similar to a leopard, its feet were like those of a bear, and its mouth was like a lion's mouth. And the dragon gave it its power and its throne and great authority. And one of its heads was as if it had been mortally wounded, but his fatal wound was healed. And the whole earth marvelled after the Beast. - Revelation 13:1-3 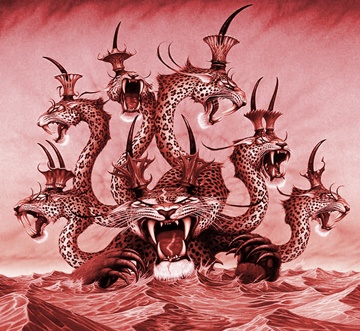 And it makes everyone — both small and great, both rich and poor, both free and slave — present marks in their right hand or in their foreheads, so that no one would be able to buy or sell who does not have the mark, the name of the Beast or the data of its name. Here is the wisdom to have understanding, to handle the data of the Beast, for it is the data of man, and his data 666. - Revelation 13:16-18

The Mark of the Beast has already been delivered to most of the world's population! The table below explains what the seven heads represent. Study it to understand it. King Jesus is coming back to destroy it, but until then we must hate it and avoid it. We cannot defeat it. The best we can do is to overcome it by the blood of the Lamb and the word of our testimony and by being willing to die for King Jesus rather than take the Mark of the Beast (Revelation 12:11).

The table above is just an overview. If you are unfamiliar with any of these terms or concepts, you will be wise to do your own research to better understand.

This webpage was last updated on 7 October 2022.

The information pesented here is based on the Bible and facts acquiured from people who humbly and regularly listen to the Spirit of God to connect the dots between the Bible and the complicated world we live in (Jeremiah 33:3, Daniel 12:4, Ephesians 3:10). It is a work in progress and is freely available (Matthew 10:8b) for any use that will honor God (1 Corinthians 10:31) and serve people (Mark 10:42-45; Galatians 5:13).