Trillions of Dollars of Mortgage Backed Securities and Other Equities Used to Fund Terrorists via the DTCC, Cede & Co., the Fed and UBS

Mortgage backed securities destroyed the chains of title to American homes. The DTCC and Cede & Co. have quietly taken title of most US stocks and most stocks in other stock markets around the world. The Federal Reserve took trillions of US dollars of that money and transferred it to 19,000 Union Bank of Switzerland (UBS) accounts to fund Al Qaeda and ISIS, which have killed or maimed thousands of Americans and have raped, decapitated and/or massacred thousands of others. And most Americans don’t even know it or care about it! 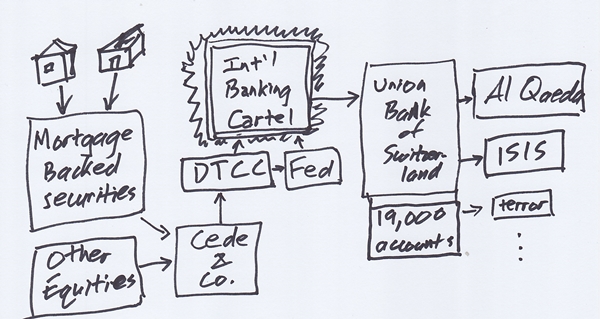 However, a couple of former US military personnel with years of research in these matters are combining their efforts and are taking action. According to Greg Morse and Scott Bennett, there is now no way for the Fed to prove that the proceeds came from a clean source and not from the mortgage crisis. They sent a whistleblower package with many pages of proof to over 500 US government entities, including dozens of inspectors generals, all 100 senators, all the major committees in the House of Representatives. Only four inspectors general (the FTC, GAO, DOJ and DOD) replied, but they just said it was not within their jurisdictions. Nobody wants to touch this. Congressional hearings are needed to get the rest of the information, so V and Greg and Scott are asking people to sign a petition for open and public joint congressional investigation and testimony.


V says, "These banksters have outsourced your jobs. They stole your money. They decimated your mortgages. They’ve created fraudulent financial instruments on Wall Street. They sent your sons and daughters to go bleed in a far off battlefield somewhere. And then on top of that they’re collapsing your economy, all the while laughing at you."

The Myth of Home and Stock Ownership in the US

V and Greg Morse explain how Americans really don't own their homes and stocks and how this massive fraud came about. Greg has written on his website,"I found over 900 individual instances of laws that had been broken and fraud was rampant throughout. Six different entities all claim simultaneous ownership of my mortgage. The conclusion was, I would have made 30 years of mortgage payments and I never would have been able to receive a legal and clear deed to my property with a properly paid in full promissory note. I had been made an involuntarily indentured servant and was a renter, not a purchaser ... I committed all my resources and have funded this effort [of whistle blowing] for six years. God has blessed me and we have gotten much further than the detractors predicted. After recent developments in the judicial process and with the filing of my Whistleblower Package, I believe the effort has been elevated to a much higher level of demand and scrutiny. I believe those that do not want the 11,000+ pages of evidence in my possession to be made public are going to do everything possible to keep that evidence from the American people." V and Greg also discuss what people can do about it. See also Save Our Family and Home.